Jay Moon
Lights Off
Manhattanhenge. Even if you don’t know what it’s the namesake of, it’s still an impressive sounding word, isn’t it?

It fights you a little bit the first few times you say it out loud, as if it’s trying to politely remind you that it demands some respect from any and all who choose to orally espouse the magic of the phenomena for which it christens.

Even the visual appearance of the word ‘Manhattanhenge’ on paper is a bit of a wonder to behold for its ability to mimic a city skyline, with stretching peaks surrounded by letters that offer a peaceful serenity in their, well, flatness. Using that analogy one can only assume the tail of the ‘g’ must represent the subway, but please-don’t hold that against it. 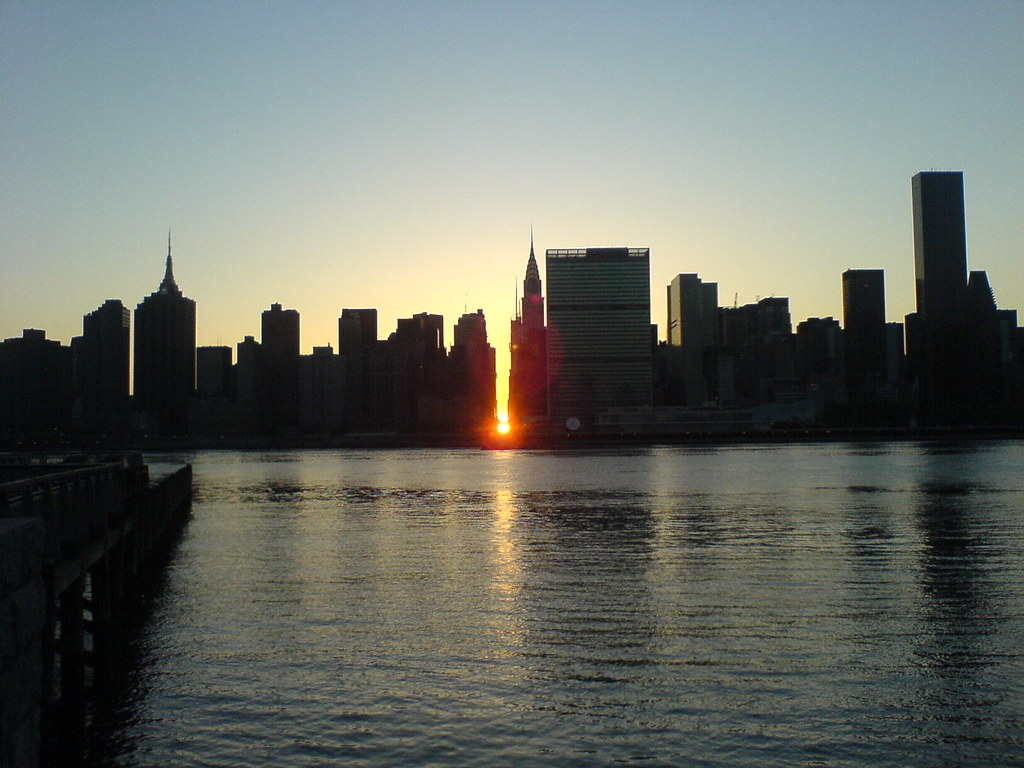 Manhattanhenge, as it was branded by astrophysicist Neil deGrasse Tyson back in 2002, is a spectacle that occurs twice yearly during the summer solstice when Manhattan’s street grid is perfectly aligned with the sun.

As the sun begins to set the view along east-west situated city streets is breathtaking, as various skyscrapers and buildings reflect golden rays that appear almost ethereal.

It already happened back on May 29 (half sun, meaning the sun is split on the horizon) and May 30 (full sun, where from a distance it appears to hover above street level), and we’re on the cusp of it again right now with a full sun on July 11 and its half sun sibling making an appearance the following evening.

So that’s fantastic. Thing is, you didn’t really hear much about this natural wonder until starting about 20 years ago. It’s not like every New Yorker over a certain age has a romantic story about rushing down to 42nd street to catch whatever glimpse they could of one of the most magical sunsets they’d ever see in their life.

It wasn’t until the aforementioned deGrasse Tyson starting talking and writing about it that the whole concept of Manhattanhenge started to gain steam.

The Manhattanhenge handle was born from deGrasse Tyson’s frustration with an oft-used (until he showed up) Manhattan Solstice moniker, since a traditional solstice it is not.

Instead, he felt the sun setting between the towering architecture of the city was much closer in appearance to what occurs at England’s Stonehenge during the summer solstice, when the sun offers up a magnificent view as it sits between that site’s historical stone columns.

If you’re a fan of make-believe heavy metal troupe Spinal Tap and their ode to the English monument that inspired one of their songs, you know that for them Stonehenge meant singing about mystical druids and banshees while very real little people in ill-fitting costumes danced awkwardly around miniature stage props. So who are Manhattanhenge’s druids and banshees?

Professional or amateur, anyone with a device that can capture an image or video is now drawn to these four days like kids to ice cream.

Sure, back in the Manhattan Solstice years photographers with a good eye and who maybe thought a little outside the box knew about these particular days (which vary every year depending when the summer solstice falls), but now it seems as though Manhattanhenge is a bonafide attraction.

Both locals and tourists flock to bars and restaurants offering viewing parties, and traffic grinds to a halt as people position themselves for the best view of the sun sinking below 14th, 23rd, 34th, and the aforementioned 42nd streets. 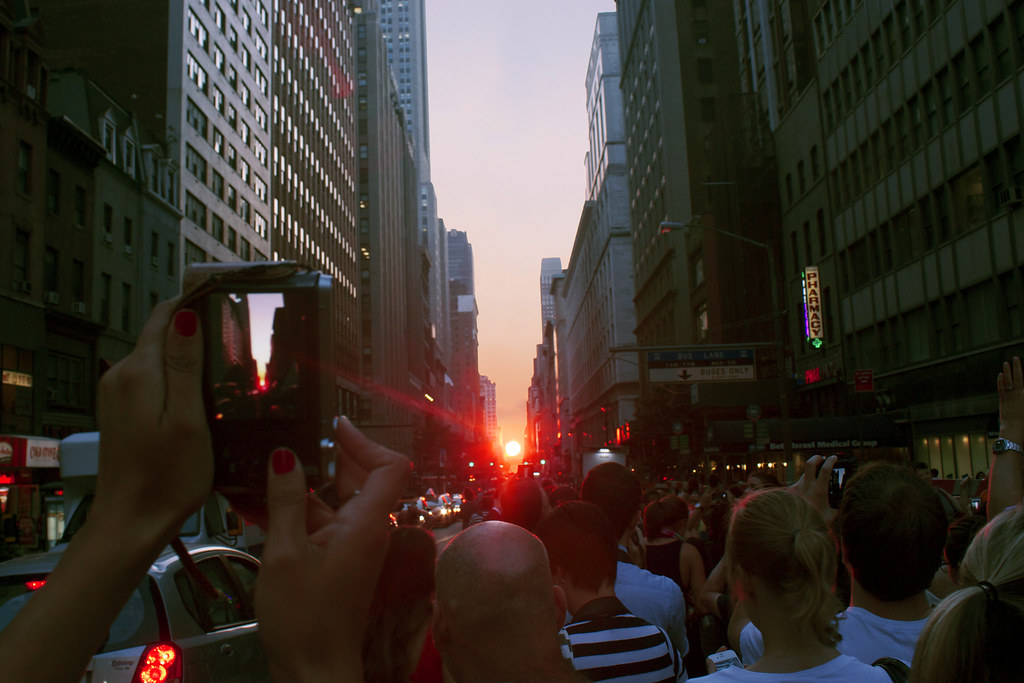 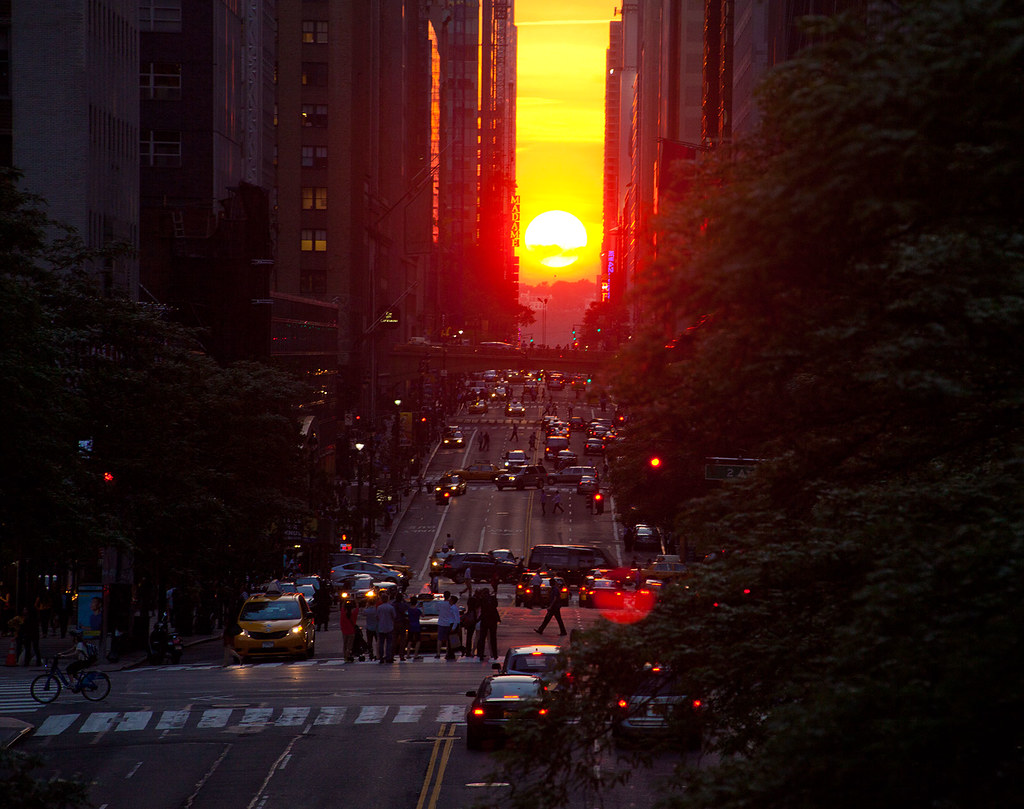 Where nature meets the grid, we find an ancient way of connecting with the cosmos.”

It’s no wonder then that with a grid like this New York is the city that never sleeps.  How could it when everyone living there is so wired after watching a sunset?