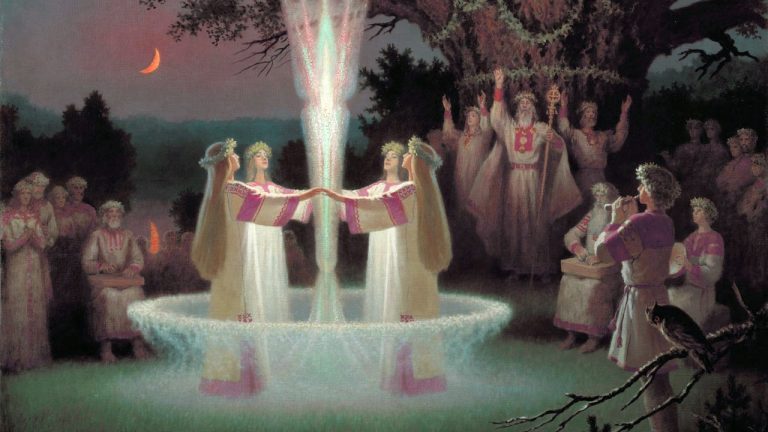 The idea of witches taking on Nazis sounds like the kind of thing you would see in an impressive B-movie. According to IMDB, there is no movie called “Witches vs. Nazis” (yet!), but this story has already happened in real life.

In 1940, the situation in England was looking pretty grim. The British army had just been evacuated from continental Europe after the Battle of Dunkirk in June, leaving behind an incredible amount of war material —including vehicles, tanks, artillery, and guns. It would take the British army months to resupply. In the summer of 1940, The Nazis seemed terrifying and unstoppable.

There was a genuine fear in 1940 that the Nazis would invade England. While the Blitz had yet to begin, the Battle of Britain was in its early days, and war had come knocking at England’s front door.

It was in this environment that the magical community of Britain stepped up to lend a hand. August first of that year was Lammas day (also known as Lughnasadh), which is one of the eight major Sabbats in the pagan wheel of the year. Essentially, it was a powerful day for powerful magic.

In the woods of New Forest, the magical community of England gathered to put their support behind the war effort. Dubbed “Operation Cone of Power”, the witches gathered and cast a spell to plant a thought in the minds of Hitler and his generals. Basically, they told them to stay out of England and suggested they would be unable to cross the English Channel.

The cone of power is a practice from a number of different magical traditions where magic can be raised and directed through a group effort. The ritual was said to be so intense that reportedly two people died as part of the casting process.

The cone of power actually has quite the distinguished pedigree of saving England. It is rather like England’s secret weapon (much like Doctor Who for sci-fi fans). Gerald Gardner, called the father of modern witchcraft by some, claims that British covens summoned a cone of power to help defeat the Spanish Armada and prevent invasion from Napoleon. If he is right, that’s quite the handy tool to have hanging in the broom closet, in case of need.

Gardner himself said, “I am not saying that they stopped Hitler. All I say is that I saw a very interesting ceremony performed with the intention of putting a certain idea into his mind … and though all the invasion barges were ready, the fact was that Hitler never even tried to come.”

That said, we do need to take Gardner’s claims with a bit of a grain of salt. Gardner is the main source of all information about the cone of power and the New Forest Coven that helped cast it. Some historians dispute the existence of an ancient, pre-Christian pagan coven in England, while others admit it is possible (or at least not impossible), and still others believe that Gardner was right.

Whether or not his belief in the ancestry of British Witchcraft is correct, Gardner was a major influence in the Wiccan community and was the founder of the Gardnerian tradition of Wicca —a denomination or sect of witchcraft, much like the Lutheran or Anglican faiths belong to Christianity.

The benefits of Operation Cone of Power are not certain, and certainly not verifiable. You may or may not believe in magic, but here is something to chew on: during one of the darkest times of World War Two, the people of England reached out for hope wherever they could find it. Considering that the armies of Nazi Germany never did cross the channel, perhaps Operation Cone of Power was more than just a group of people chanting in a forest.